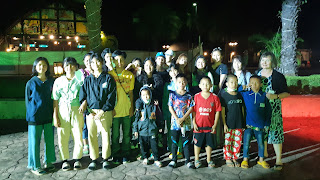 We're sticky and full and exhausted and have all fallen asleep in various ridiculous positions on the way home.  Proof of a great time out for fun - 'bai teo'. 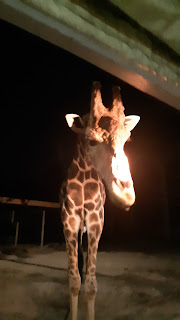 For some of our kids, this would have been a first.  You can tell.  The little boys stay safely close to Ahajahn Suradet, eyes wide, uncharacteristically saying nothing.  Even our older girls, the new ones, aren't quite sure what to make of the grand theme-park entrance way and lining up to go through the turnstile.   At a few points - especially when the giraffe came just a little too close - it was a tad overwhelming, hands clutching tightly on Ahajahn Ruth's arm.

For the most part though, our trip to Chiang Mai Night Safari was a whole lot of oohs and ahhs and giggles and wide-eyed wonder.

This is no small endeavour.  It begins back in Canada with folks generously donating funds to make it happen.  When you're taking twenty-two people on a day trip, you have to do a double take on the price.  And right now Thailand's economy is in the very same position as the rest of the world - trying to catch up.  It cost us 6,500 THB for admission only, which equates to about $214 CDN.  This includes the bonus that children under 100 cm are free (that was six of us).  Maybe that sounds like a fairly decent price, considering what it might be to take a family of four to a similar venue in and around the GTA.  But for our budget and in these times this was a bit more than previous comparable day trips might cost.  We would NEVER have been able to swing it were it not for the generous gifts.  So a HUGE THANK YOU to everyone who put anything at all in that little box I had out for a few Sundays....and/or contributed directly on the day of the Garage Sale or through Highview's various donation venues!!!  You know who you are. 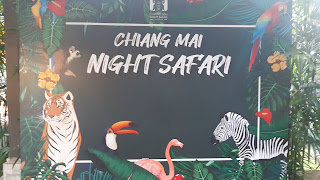 It meant we could learn about all kinds of animals through various demonstrations and shows.  But best of all was the train ride 'through' the pavilions.  This is where the giraffe comes in, and really comes in!
The way it's laid out is that many of the animals can come and interact with us on the tram.  The giraffes seem to like to check out each car.  The zebras didn't mind getting up close and personal.  And all manner of antelope and deer treated us with a close up look.  More dangerous animals, of course were separated from the track by strategic ditches and fencing, but none of it very visible from our perspective, as we travelled through about five different countries. 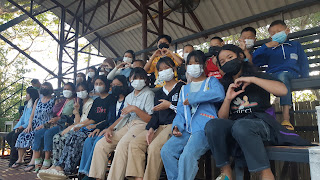 My personal favourite was the Asian sun bear, who was expecting us and greeted us happily by rising up on its haunches to show off its bright orange chest patches.  Of course it helped that our driver tossed in an apple or two, drawing out his other two friends.  But honestly, was that bear smiling?
Another favourite was the Asian bear cats as they strolled right above us across a rope set up with some treats for them in the middle. 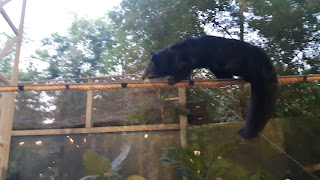 By the time we leave it's dark and past our supper time.  The snack Yupa packed helped, but we still need some sustenance.  So, where do you bring 22 people for an evening meal on a tight budget and without a reservation?  To the noddle stand beside the 7-11 on the side of the highway!!  You should have seen the guy who runs the stand!  He was elated.  He even asked one of our older girls to take a picture of all of us at the four small tables he has on the side.  Like a this-never-happens-to-me-and-I-gotta-put-it-on-Facebook kind of picture.  His joy was another part of what made the day for me.
And of course, because we were so close to a 7-11, we just had to go in for some treats.  Something more fun to drink than the water from the cooler at the noodle hut.  And something light and sweet, but not too much because it was almost bed time by now.
For me, the most notable feature of the day, as it always is, was the children themselves.  Perhaps it's because they are tad overwhelmed.  Maybe it's because they don't get this very often so they're not taking anything for granted.  But for the entire trip, there is not one bit of acting out or complaining or need for correction, other than reminding Jua (our youngest and most animated) to come back a bit from the other cars in the parking lot by the noodle stand.  He was dancing in the someone's headlights.  Honestly, other than that, nothing.
We're making happy memories for these kids.  More than poverty could have imagined for them.  And it's not about the big trips either.  It's in sharing it together with this big warm family.  The kind of family you can fall asleep on, even if you're a bit sticky, on the way home from a really grand 'bai teo'. 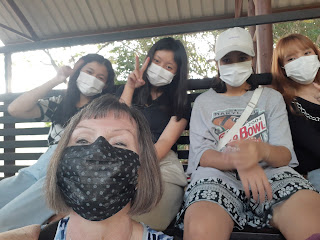 Posted by Highview Thailand Team at 3:20 AM

Highview Thailand Team
Highview To Thailand! In partnership with the New Family Foundation, Highview Community Church sponsors orphan and at risk children who have been gathered into a spectacular family that lives about 45 minutes west of Chiang Mai, at a place called Hot Springs. This is our story. During actual visits to Hot Springs our Team(s) can be reached at "HighviewToThailand@yahoo.ca"